How To Quit Caffeine (And Why You Might Want To) 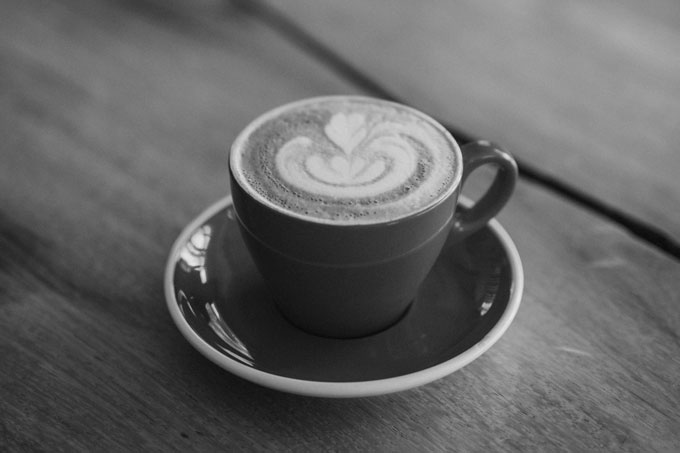 Last week, somewhat on a whim, I decided that my on-again-off-again relationship with caffeine was going to come to an end.  For good.  A clean slate divorce and never getting back together again.

I decided to ditch my ONE measly cup of morning coffee and thought it would be no big deal.  ONE cup.  Small deal, right?

Boy, was I wrong.  Apparently my body thought it was a HUGE deal and the caffeine withdrawal symptoms have been brutal.

So why in the world, you might ask, would an anxiety-prone Highly Sensitive Person be drinking coffee in the first place?

Well, it’s complicated.  I grew up in Finland, a country that happens to be the world leader in per capita coffee consumption, so I took up the habit as a teenager just like everyone else around me.  It’s like a national past-time over there.  Sitting around drinking coffee.

At some point, I did realize that anything above a cup or two a day made me feel jittery and that I had to keep the dosage super consistent in order to avoid headaches.  I had to have the exact same amount of caffeine at the exact same time every day or a headache would ensue.

What a pain in the ass!

When I started trying to get pregnant, I weaned myself off and stayed off for about six years.  I should have just stayed off, but when I found myself with three kids under three and a full-time job, there were days when I literally couldn’t force myself to keep my eyes open to make it through the day.  That should have been a sign that there was something wrong with my lifestyle, but I ignored those signs for a long time and just pushed through with coffee and diet coke.

Then last year I started cleaning up my nutritional act…  I did the Whole30, gave up soda, and cut my coffee consumption back down to that one measly cup.  I’ve done okay with it, and with one cup, I was well below the 400 mg of caffeine per day that is considered safe for most healthy adults.  And there is even some evidence of caffeine having health benefits.

So why bother quitting?

Reasons To Give Up Caffeine

Here’s what it came down to for me.  I’ve been on this clean living kick for a while now – slowly adjusting my diet and lifestyle to address the root causes of all my physical and mental health issues to try to get my body and brain working as well as they possibly can.  And because of some research studies I stumbled upon, it became clear to me that, in my case at least, even a moderate amount of caffeine is counterproductive to my other efforts to maximize calm and well-being.

Although it’s easy to forget this given how prevalent caffeine is in our every-day lives, caffeine is an addictive drug that serves as a central nervous system stimulant.  While it may be harmless for most people, it’s definitely something to think twice about for highly sensitive people and for those of us prone to anxiety.  Here are a few reasons why:

These are the factors I was thinking about when I made the decision to quit.  If I’m trying to maximize calm and lower my stress levels, why in the world would I be consuming a stimulant on a daily basis?  And if I’m so tired that I can’t stay awake without caffeine, isn’t that a sign that my body needs rest?  Why would I want to chemically mask the signs that let me know what my body needs at any given moment?

Enduring the caffeine withdrawal symptoms for the past few days has only added fuel to my fire. 🙂 I’m now more convinced than ever.  Even if I didn’t notice what that daily cup of coffee was doing, it was clearly affecting me given how hard it was for my body to adjust to not having it anymore.

I know this isn’t the right decision for everyone, but if you, too, are ready to quit caffeine, here’s how to go about it.

How To Quit Caffeine

1. Figure Out How Much Caffeine You Are Actually Consuming

The first step in letting go of your caffeine habit is to figure out how much caffeine you are actually consuming per day, as that may affect how exactly you go about quitting.

Here are some estimates from the Mayo Clinic:

Some foods, candies, and medications also contain caffeine.  The Caffeine Informer has a giant database listing caffeine amounts for various products by brand.

2. Decide If You Want To Wean Yourself Off Caffeine Or Go Cold Turkey

Next, you need to decide whether to wean yourself off caffeine or go cold turkey.  Unless you are my kind of crazy, I strongly recommend weaning. 🙂

Weaning Yourself Off Caffeine

When you wean yourself off by slowly decreasing the amount of caffeine you are consuming over time, you are less likely to suffer withdrawal symptoms.  This is the easier way to go, especially if you are used to consuming relatively large amounts of caffeine.  The only downside is that it takes a bit more planning and organizing, since you need to track your caffeine consumption for a while.

Here’s one way to go about it:

Step 1: Eliminate candies and medications containing caffeine for one week.

Step 2: Reduce your soda consumption by about half a can every two days until you are down to zero.

Step 3: Reduce your coffee consumption by about 1/4 cup every two days until you are down to zero.

The downside is that it sucks!

If you are going cold turkey, you should definitely start on a day off.  I started on a Saturday, which was good, because by the afternoon I was feeling H-O-R-R-I-B-L-E.  I nursed myself through the worst of it on Saturday and Sunday, and I while I wasn’t back to normal by Monday, I was at least functional by then.

Even if you are weaning, you might want to start out on the weekend just to be safe in case you feel worse than expected.

4. Stock Up On Herbal Teas

Dealing with the physical caffeine withdrawal symptoms is only half the battle.  The other half of the battle is changing a habit.  We get stuck in our ways and it can be hard to come unstuck!

The key to remember is that replacing a habit is a gazillion times easier than eliminating a habit.

That’s why I recommend stocking up on herbal teas, especially if your caffeine was coming in the form of coffee or black tea.  There’s no need to give up the cozy comfort of a warm beverage.

Herbal teas are technically not teas at all.  They are just collections of leaves from plants other than tea and they do not contain caffeine.  I’ve been loving this orange-flavored one

If you decide to follow my crazy example and go cold turkey, be prepared and just accept that you might be feeling like shitzski for a few days.  Here are the withdrawal symptoms you can expect:

For me, the first day was the worst.  I had a killer headache by noon and by 4pm I could barely keep my eyes open.  The next day it eased up a bit, but a low-grade headache lingered for five more days.  And I was definitely feeling more fatigued and less focused than usual too.  I basically wrote this article because I couldn’t focus on any other topic. 😀

What about you?  What’s your experience with caffeine?  Been in love with it forever?  Wanting to ditch it?  I would love to hear from you in the comments below! 🙂

Highly Sensitive Person Or Anxiety? How To Tell The Difference

How To Deal With Driving Anxiety

Why Am I So Exhausted All The Time?

25 Ways To Eliminate Stress From Your Life

Books To Help You Find Yourself

How To Start An Exercise Program And Stick To It

5 Life Lessons I Wish I Had Learned Sooner

How To Stay Healthy: The Way Out Of Self Sabotage 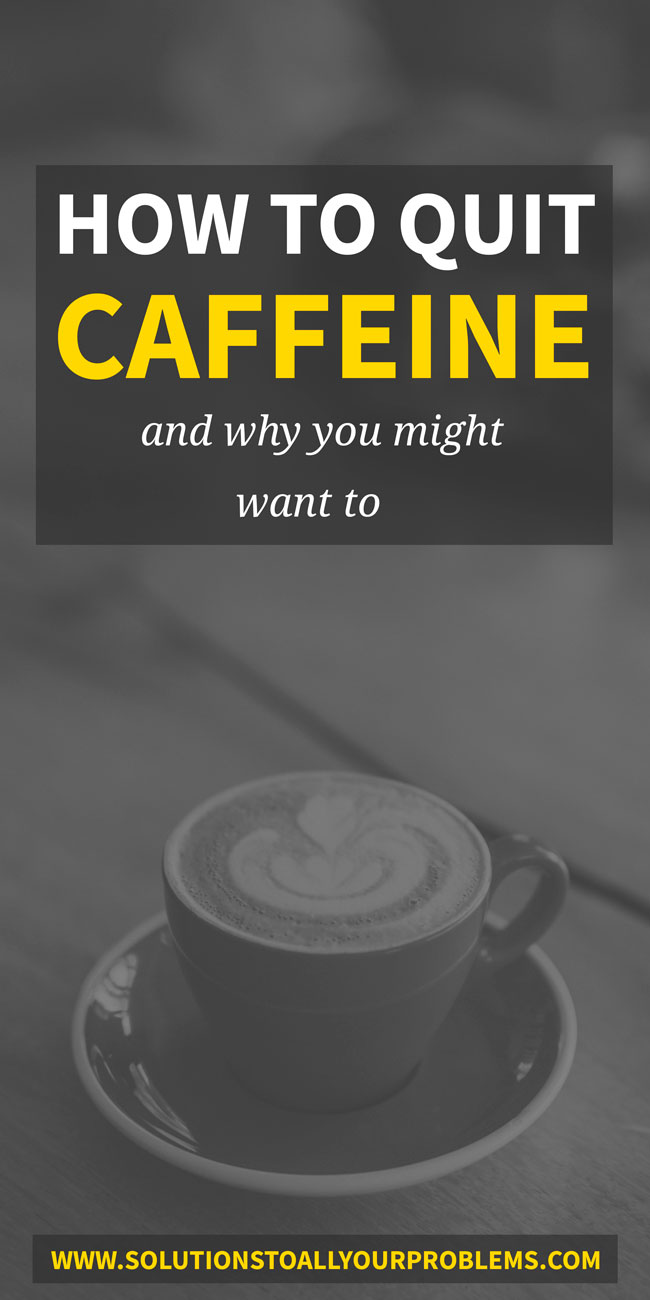 5 Signs You’re Suffering From Introvert Burnout (And How To Avoid It!)

Best Gift Ideas For Introverts Who Need To Destress

What Does It Really Mean To Be Overstimulated?