How To Deal With Criticism Without Freaking Out 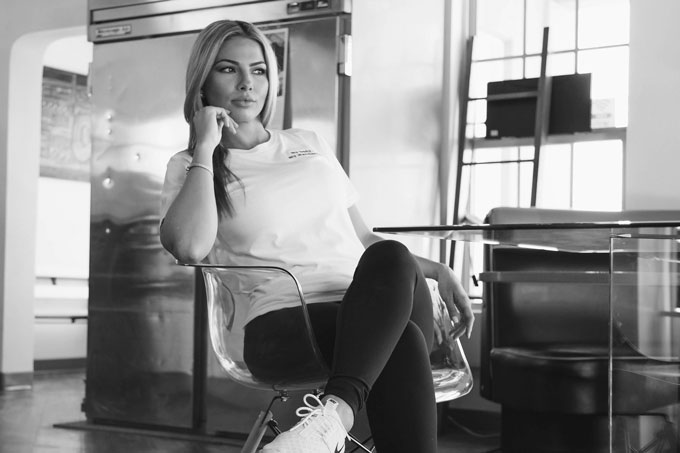 I’m so conflict averse that when I first had a vision for this website, I considered setting it up without a comments section.  I knew that, given what I write about, negative comments and criticism were inevitable.

After thinking about it though, I did decide to allow comments and I’m happy I did.  I have “met” so many awesome people via comments and emails people send to me and it’s now one of my favorite aspects of what I do.  And the negative comments have been few and far between.

That being said, the first couple negative comments sent me through the wringer.  To be completely honest, I totally freaked out.  Even though somewhere in the folds of the rational part of my brain, I knew that it wasn’t the end of the world, I still felt like I was under attack.  And we all know what happens when an anxious people pleaser feels under attack. 😉 Full on physical stress reaction bordering on panic.  Calling my husband at work so he could tell me I didn’t need to care.  Ruminating about it for days before being able to forget about it.

Yeah, it’s not pretty and it feels like shit.

After this happened twice, I realized that I needed to do some work to learn to handle this aspect of blogging better.  So I did some reading and lots of reflecting to prepare myself and to figure out how to deal with criticism without a full-on freak-out.

And then last week, lo and behold, I had a chance to test my newly developed skills as a zen recipient of criticism.  Someone commented that I was recklessly playing with people’s lives by sharing my less than ideal experience with talk therapy, as it might discourage other people from seeking help.  This startled me, because it’s not like I’m sitting here behind my laptop scheming about how to ruin people’s lives.  And I did freak out for a moment.

But only a very short moment.  And then I was able to think it through and calm myself down.

I had cracked the code!

And whenever I crack another code in my search for a life that feels less like shit, I like to pass it on. 🙂

So today, I want to share with you the five ideas related to receiving criticism that have helped me out the most. 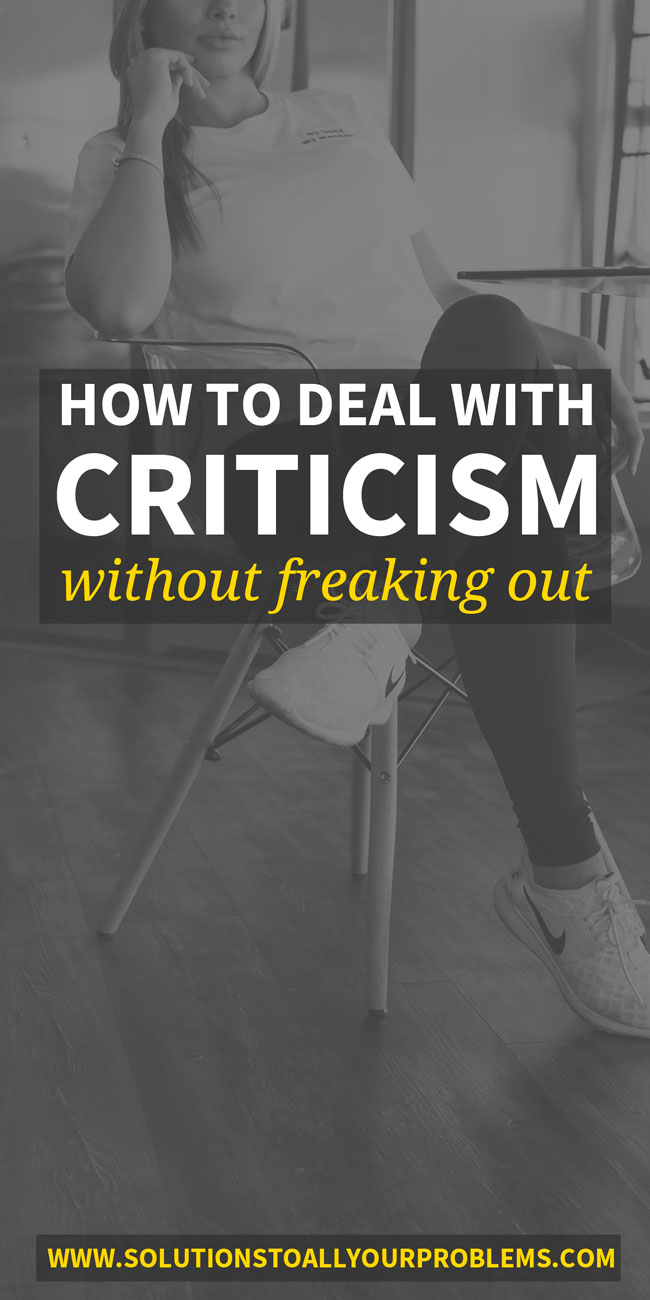 How To Deal With Criticism Without Freaking Out

1. Become Friends With Being Wrong

First of all, it’s unreasonable to expect anyone, including yourself, to always be 100% correct, always be 100% perfect, and never make any mistakes.  Being wrong is a normal part of being human.

Second, the only way to grow in life is through realizing that you have been wrong about something and then adjusting your beliefs accordingly.  When I think about how many things I was ignorant about or outright wrong about when I was, say, 18 years old and how much I have learned and progressed in life since then, because I was open to considering alternative viewpoints, it becomes obvious that finding out that I’m wrong about something is a GOOD thing.  It’s a gift.

2. Put On Your Objective Hat And Look For The Truth

When you receive criticism, and especially if the criticism is delivered in such a way that you feel under attack, it’s easy to default to one of two forms of All-Or-Nothing Thinking:

However, reality is rarely this black and white.  More often the truth falls somewhere in between.  It’s likely that a criticism will have some truth to it, but not be 100% right or wrong.

Your job is to get to the truth.

Let’s look at an example.  Here’s one of the comments that came in last year that totally freaked me out.  It was in response to 7 Secrets To A Successful Introvert-Extravert Marriage.

“As an extrovert dating an introvert. I’d say I’m lucky my introvert is so more open than your article describes. Your article suggests that you’re very closed off and your husband seems to be doing all the compromising. It’s all subject to your feelings and your needs. When do you do what he likes? Never it would seem. That’s really mean. My boyfriend and I actually compromise, He makes the effort to come out with me, even when he doesn’t particularly want to, and I’ll set aside time to do things he wants too, even if I’d rather be going out. You seem to ask your husband to do things on his own alot because you don’t want to alot. And you’ll only ever do things when you want to. What about what he wants? You’re mean to him. He must love you alot to put up with you and for you to get your way all the time. That’s him being awesome. When are you nice to him then? You’ve given a huge list to extroverts to follow, what about a list you introverts could do with so that you’re not so dismissive of us extroverts feelings and needs. We’re super understanding. And so is my gorgeous introvert. You on the other hand are really not. You’re harsh on your extrovert. There’s only so much you can put down to personality. Sometimes you’re just mean and used to getting your own way all the time.”

I think this comment got to me at the time, because it was like straight from an insecure introvert’s inner critic.  And I immediately surrendered.  OMG, am I a horrible wife?  Does my husband secretly hate me?  She said I’m mean!  I must be mean…

You get the picture.

But had this comment come in today, I would have taken a deep breath and put my objective hat on in order to get to the truth.  I would have systematically dissected the criticism to see if there is anything I can take away from it.

I would have started by looking for points of agreement and I would have written them down to help keep my thoughts organized:

Next, I would have written down points of disagreement.  Like so:

So what’s the take away here?  Well, I either don’t agree with the criticisms at all, or I agree with them, but don’t see them as negatives (ie. being closed-off and taking care of my basic needs), so there’s nothing for me to do here other than move on.

3. Know The Criteria For Constructive Criticism

In addition to objectively dissecting the criticism, another technique I find helpful is to think about the criteria for constructive criticism.

Criticism can be constructive and a gift when it meets certain criteria:

Here’s a great example of constructive criticism from another reader:

“Oh my gosh! I can’t thank you enough for your blog!! I can identify with almost every single word you have shared. I’m an overwhelmed, anxious, and exhausted introvert who is trying to find more joy and I want to read every single article you have published. I wish all of your articles were in an actual printed book! I am not the most tech savvy person and I get lost going from article to article and feeling like I missed some and can’t find some I have already read, but want to go back to and re-read. I just lose track, if you know what I mean. I have bookmarked some, but any tips are welcome on how to make sure I have ALL of your articles. So, it’s probably no surprise to hear that I am overwhelmed by all the articles, but don’t want to miss a single one! Again, thank you for all you have shared. Maybe there’s hope for me yet!!”

So basically, this reader is letting me know that she likes my content, but my website is a hot mess and it’s hard to keep track of what’s where.  And she is absolutely right: A grand re-organization is badly needed.

Note that this reader was kind and respectful, she pointed out both positives and negatives, and her criticism was specific, actionable, and based on her personal experience as a user of my website.

This criticism is very valuable feedback and it’s something I can take action on.

On the other hand, the first comment I shared was clearly not constructive criticism.  It was disrespectful, it was not balanced, she attacked who I am as a person, and she was making a whole host of inaccurate assumptions about the state of my marriage.  She clearly had not read my article very carefully and pretty much the only take-away from her comment was that she doesn’t like me and she can’t understand how anyone else (ie. my husband) could possibly be happy with me either.

What I see now very clearly is that the criticism she delivered says a whole lot more about her than it does about me.

Which brings us to the next point…

4. Recognize When Criticism Says More About The Giver Than The Receiver

For those of us with dysfunctional relationships, people pleasing, and low self worth in our past, it can sometimes be hard to evaluate when we are being “too sensitive” and when we have legitimate reason to set boundaries and just ignore a criticism someone is doling out.

When I’m unsure, it helps me to ask one of these three questions or even all of them:

5. Remember That You Are Not For Everyone

You can approach criticism in one of two ways.  You can do everything in your power to try to avoid it.  In my case, I could not have a blog at all, or I could not allow comments, or I could only write watered-down polite niceties that won’t ever hit a nerve with anyone.

You only need to find your way to YOUR people.  And the only way to find YOUR people is by taking a risk and being authentic and sharing honestly.

So dear reader, please go out into the world and BE YOU.

Don’t let criticism hold you back.

And remember that you are not for everyone.