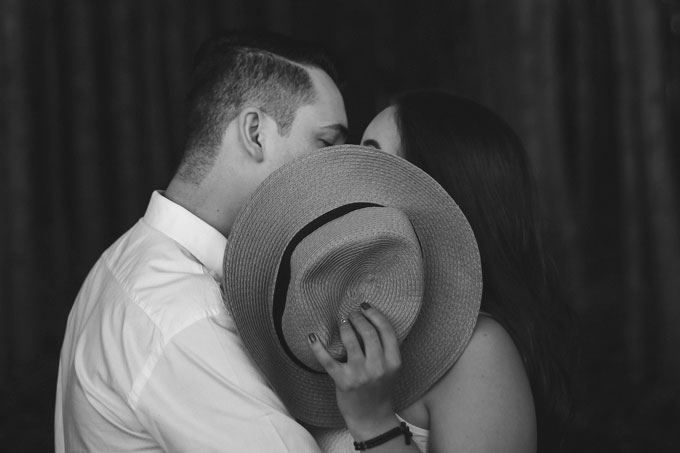 In the Myers-Briggs personality typology, my husband would be described as a sensing personality.  Sensors prefer to perceive the world via the five senses and use them to detect what’s in front of them. Sensing relates to concrete things. What do you see, hear, smell, feel, taste? What is actually happening right now? People with a sensing preference tend to be more observant of facts and details in their immediate environment, more down-to-earth, and more practical.

I, on the other hand, am an intuitive personality.  An intuitive mind will unconsciously take in lots of cues from the environment, put it all together, and produce new insights or ideas. Unlike sensing, which deals with concrete matters, intuition deals with the abstract – with theories, with ideas, with possibilities, with meanings, with implications. They ask why and what if.  What could potentially happen? How could things be changed? Intuitives tend to be more future-oriented and imaginative. Intuitives often have their “head in the clouds” thinking about the big picture and might miss concrete details around them. 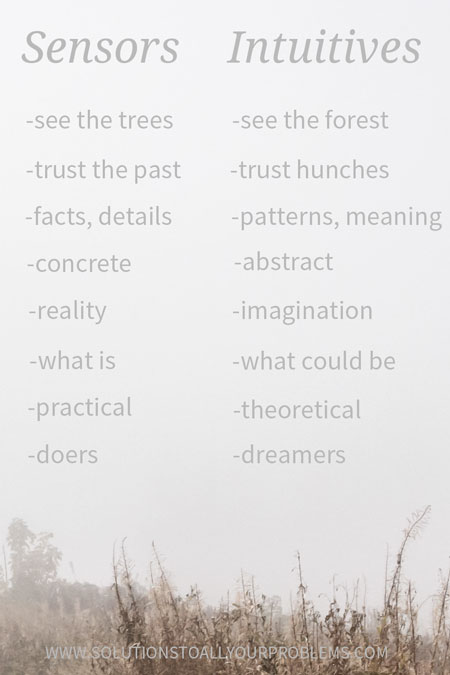 When I first started learning about personality type, I read Just Your Type: Create the Relationship You’ve Always Wanted Using the Secrets of Personality Type

by Paul Tieger and Barbara Barron-Tieger and was more than a little shocked when it basically summarized twenty years worth of marital conflict between my husband and me in just a couple of pages.

While some conflicts we’ve experienced over the years can be attributed to the fact that he is an extravert, while I’m an introvert, I would say that him being a sensor and me being an intuitive has created even more misunderstandings over the years.  An intuitive-sensor marriage requires some serious work! 😉

Becoming aware of this personality difference has really helped us understand each other better and avoid some of the arguments that we used to get into over and over, so I wanted to share here what we have learned.

If you are an intuitive married to a sensor or vice versa, here are five steps you can take to make it work. 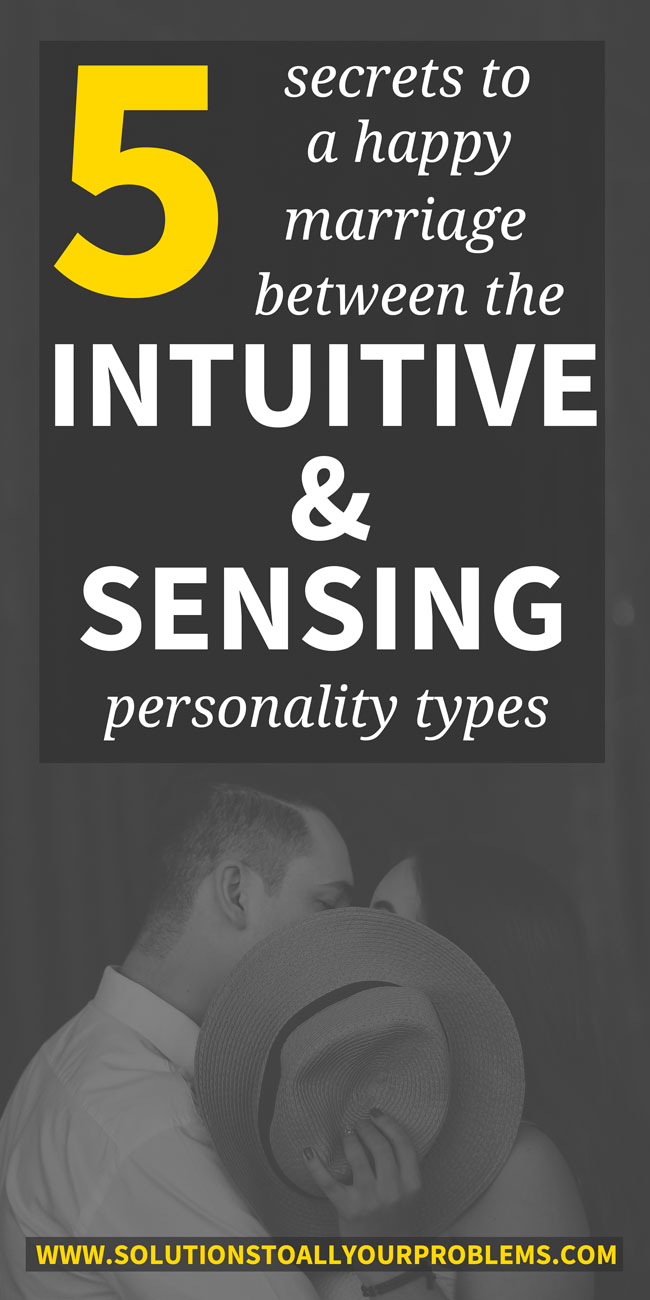 5 Secrets To Successful Relationships Between Sensors And Intuitives

1. Accept And Appreciate Each Other As You Are

Accept that you were born with different ways of perceiving the world.  Each way has its pluses and minuses, but neither is superior to the other.  Whacking the bushes on the path right in front of you is important and essential for survival.  But so is being able to look further ahead in search of progress.

Yes, it can be frustrating at times to have to deal with this difference, but the difference does not make your spouse crazy or defective.  Stop waiting for your spouse to suddenly “see the light” and start seeing things or behaving the way you do.

2. Learn About Level Of Abstraction

One of the biggest communication obstacles between sensors and intuitives is that they prefer to hang out on different rungs on the ladder of abstraction.  The ladder of abstraction is a way to visualize the progression from concrete to abstract.  The higher you go on the ladder, the more abstract.  The lower you go, the more concrete and specific.  Here’s an example of how it works:

The Granny Smith in my hand

Sensors like talking about more concrete things.  Intuitives like talking about more abstract matters.  When my husband brings up the Super Bowl, I’d rather talk about the way team sports came to replace war in tribal societies.  When my husband points out how nice and sunny it is today, it makes me think about climate change.  When my husband talks about our daughter’s homework, I want to turn the conversation into school system reform.  We may be interested in the same general topic (sports, weather, education), but we approach it from completely different angles.

Again, there is nothing wrong with either way – it’s just a matter of preference – but it can make it seem like you are living in different worlds. My attention is naturally drawn to the big picture – what is happening in society or the world at large. I get incredibly bored by small talk – when people are stating “the obvious” or exchanging predictable pleasantries.  I’m much more interested in what is going on behind the scenes, what problems people are struggling with, why they are doing this or that, and how we could change things.

My husband’s attention is drawn to the here and now and how we can get through today. Shouldn’t we cook dinner for the kids before trying to save the whole world? What about the dishes in the sink and the dirty laundry?

3. Be Willing To Talk About Things That Matter To Your Spouse

Now that you know, what can you do? The solution is good old boring compromise. If a sensor and an intuitive are to have a marriage that is balanced and satisfying for both parties, they both need to give a little and learn to operate in the other one’s world.

Sometimes my husband and I talk about politics and science and books and solving the world’s problems. Sometimes we talk about doing the taxes and what’s for dinner and finally fixing that toilet that sounds like there is a tropical storm going on inside it.

We have found that it helps to remind each other to shift communication modes. I might say “look, my brain is about to explode, do you have the energy for an abstract conversation?”  Or he’ll say, “we need to talk about some bushwhacking things, are you able to focus on some details for a minute?”  When reminded that our spouse really needs us to “speak their language” for a moment, we can get in the right frame of mind and put in our best effort.

4. Learn To Talk About Change And New Ideas More Productively

I’m only generalizing a tiny bit when I say that intuitives are all about changing things, while sensors are all about the status quo.  And this, I would say, has great potential to be the number one source of conflict in an intuitive-sensor relationship.  It’s further exacerbated by the way intuitives and sensors communicate. Intuitives tend to just stick to the big picture and leave out a lot of detail.  They can get really excited about a new idea without having yet figured out all the nitty-gritty.  Sensors – who actually pay attention to detail – will point out everything that is wrong with the intuitive’s new idea. And they will go on and on and on with their details before getting to the point.

So you end up with this:

INTUITIVE: I HAVE AN AWESOME IDEA THAT I’M SUPER EXCITED ABOUT!!!

Simply becoming aware of these patterns will go a long way towards avoiding getting sucked into them.  These days, I will catch my husband and me getting into one of the two arguments above and say “look, we are doing the intuitive-sensor argument again”.

To make these conversations more productive, the sensor should listen to the intuitive’s ideas and visions with an open mind. Even if some facts are missing, that doesn’t mean the whole idea should be rejected. The sensor should add “reality” in support of the idea – not against it.

At the same time, the intuitive should try to include as many details and specifics when discussing an idea as possible. A lot of times, I tend to leave out details that I don’t see as essential and my husband feels like I’m trying to hide something.  And let’s face it, the details do need to be addressed or a grand vision will remain exactly that – just a vision.

The beauty of personality clashes in marriage is that, while they can drive you crazy, they can also be your biggest asset as a couple. Intuitives and sensors each have their strengths and a couple with both types can take advantage of all of them.

Two sensors can have a perfectly happy life, but they might just end up whacking the bushes in a circle, never getting anywhere.  Two intuitives might have a grand vision of getting to more fertile grounds across the mountains, but they might be tangled in bushes and killed by snakes in transit.

If you are lucky enough to be teamed up with the other type, milk it for all its worth.

Let the sensor take the lead in dealing with the here and now, with the intuitive responding and giving balance.

Let the intuitive be in charge of the future and the big picture, with the sensor responding and giving balance.

Are you an intuitive married to a sensor or vice versa? I would love to hear about your struggles or successes in the comments below! 🙂

10 Benefits of Being An Introvert Married To An Extrovert

10 Benefits of Being An Introvert Married To An Extrovert

How To Overcome Relationship Anxiety

How To Overcome Relationship Anxiety

How To Talk To Friends And Family About Your “Issues”

How To Talk To Friends And Family About Your “Issues”

Highly Sensitive Person Marriage: 10 Secrets To Success With A Non-HSP

Highly Sensitive Person Marriage: 10 Secrets To Success With A Non-HSP

How To Find Your Tribe

How To Find Your Tribe